A few weeks ago, I took a group of students to the Cinque Terre for a day of sunnin’ and funnin’ along the Italian Riviera.  I was shocked at how little these kids seemed to know about the area, other than the fact that it was “pretty famous or something” (as I heard one student so eloquently state), so I figured if these little bastards were this uneducated, somebody needed to set the record straight.  While I’ve been to the Cinque Terre numerous times, I still find something new to discover each time I’m there–if you haven’t been before, then get your little booty on the next train to La Spezia….now.

Here’s what to know before you go: 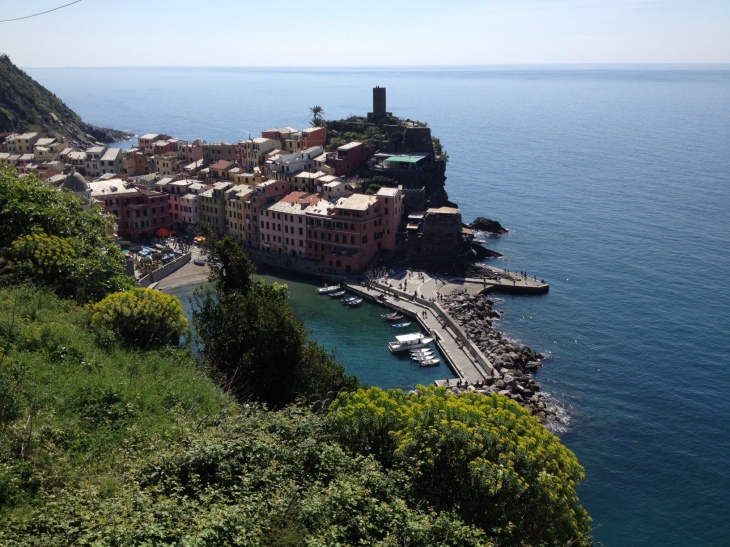 I cannot stress this point enough—if I have to hear one more group of twenty year old American girls blabbing on and on about how they just can’t figure out how to get to the town of “Sinkway Terray” because it doesn’t show up on the Trenitalia website, I’m gonna throw myself off the Duomo.  The Cinque Terre, or “Five Lands” as it translates into Italian, is a region consisting of 5 tiny towns perched along the Ligurian coastline (actually, the Cinque Terre includes tons of smaller little hamlets and villages, but most people just tend to visit the 5 famous towns and skip the podunk countryside).  So in order to avoid being mocked mercilessly by Italians and expats alike, please—for your own sake—remember that you are in fact referring to multiple places when you talk about Cinque Terre.

2.  There are 5 major towns in the Cinque Terre—Riomaggiore, Manarola, Corniglia, Vernazza & Monterosso.

Obviously no one gives a crap about the tiny little towns that surround the area but the people actually living there, so if you’re going to Cinque Terre you’re probably gonna want to visit these 5 places first.  Here’s a little blurb about what to expect in each town:

Riomaggiore–This is the first town you hit when you’re on the train heading into the area.  It’s tiny, but then again so are all the other towns.  To be honest, there’s not a whole lot to see/do in this town, but it’s got a cute little harbor where you can sit and have a glass of white wine or snack on some foccaccia while you plan your attack on the other 4 cities.  This is where the famous Via dell’Amore, or Lover’s Lane, begins as the Sentiero Azzurro path connecting Riomaggiore to the next town of Manarola, but like I said before, it’s currently closed.

Manarola–The second (and also second smallest) town on your train stop (coming from La Spezia) will be Manarola.  Surrounded by vines, it produces the most grapes in the whole of the Cinque Terre and is home to the famous  Sciacchetrà, a sweet dessert wine.  The footpaths to and from this town (population 739) cut through the vineyards and allow for some nice views of the coastline and neighbouring town.

Corniglia–The third town on your way through the Cinque Terre, Corniglia is a bitch to get to (we’re talking 365 stairs to climb from the train station to get to the main part of the town) but once you’re there, it’s lovely.  It’s the only town not directly next to the sea, but is surrounded by the jagged vineyards and latticed gardens so common in this area.  Plus, it’s the best town to catch a 360° view of all 5 towns along the coast.

Vernazza–The fourth and most famous town of them all, Vernazza is a bit of a show-off.  It’s also the town that is most frequently photographed, and for good reason–it’s freaking beautiful.  Getting off the train, follow the road that slopes gently down towards the harbor.  Here, you’ll find the central heart of the city, where fishermen clean their wooden boats in the shadow of the Church of Santa Margherita d’Antiochia just off the main Piazza Marconi, while children run barefoot along the stone promonotory, skipping rocks along the water and collecting sea glass.

Monterosso–The fifth and biggest town in the Cinque Terre, Monterosso is the most resort-like of the five villages.  Here you will find a long stretch of sandy beach and an established promenade with shops, cafes and restaurants all scattered along the waterfront.  Don’t forget to check out the gorgeous Old Town center while you’re there–Monterosso is actually split into two, with one side of the city dubbed the “New Town” and the other side just before you hit the tunnel that connects the two halves together.

3.  Buying a Cinque Terre card is not always the most practical thing to do while you’re visiting.  Read the fine print carefully before you commit to buying the card.

The Cinque Terre card is a pass that allows you:

a) unlimited access to the trains that run between the 5 towns (including from La Spezia to Levanto, the two towns that sit at either end of the string of 5 coastal towns)

b) entry to the National Park of the Cinque Terre, which is where you will find all of the hiking trails that connect the towns.

As of April 2014, the Cinque Terre card will cost you €12 for a day-long pass (although it claims to be a 24 hour pass, the one-day Cinque Terre card will in fact expire at midnight on the day you’ve validated it).  Now this may be worth it if you’re planning on hiking all day long and riding multiple trains, but as the most famous Trail #2 (connecting all 5 towns along the coast) is currently closed, you might just skip buying the card and instead just purchase individual train tickets (around €2  each) for your passage between the towns.

4.   The most popular hiking path, the Sentiero Azzurro or Trail #2, is currently closed (unless you don’t mind viewing these closures as “suggestions” rather than fact, as most Italians tend to do).

I was totally bummed the last time that I went to Cinque Terre, only to be told that the most popular hiking path had been closed for ongoing “renovation” work.  While the Cinque Terre has been hit with its fair share of landslides that destroy the surrounding areas, I decided to be a little bit furba and hike from Vernazza to Monterosso along Trail #2 anyways.  Although there was a sign stating the path was closed, there were no barriers preventing you from accessing the path, and many people were already on the trail so I figured what the hell, why not see how far along I can go before someone yells at me for clearly violating the sign.  To my surprise, not only was there no one manning the little wooden huts that connect the trails (this is normally where you get your Cinque Terre card stamped upon entering the National Park) but I managed to make it all the way to Monterosso without fainting or falling off a cliff.  Score for me.

5.  If you don’t try the pesto, white wine (local only) and foccaccia while you’re there, then don’t bother going at all.

This seems pretty self-explanatory.  Also, the sea food is obviously also bangin’, so make sure you eat some of that too.

Living in Florence means always looking out for mystery poo on the sidewalk. View all posts by The Florence Diaries